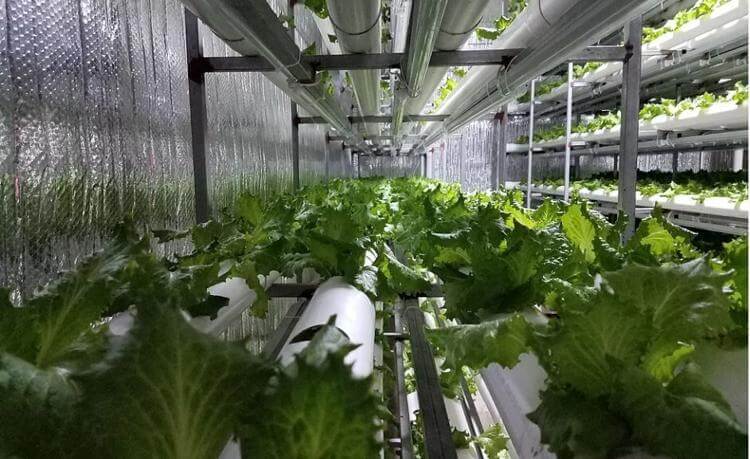 A small business in the southern region of Puerto Rico is seeking to revolutionize agribusinesses with sustainable practices, while providing food security and reducing the need for imported produce.

Francisco Santana founded Grupo Vesan in 2015 with a simple concept: farming differently and more effectively. He looked to indoor vertical farming and became the first company in Puerto Rico to adapt that model. As previously reported by THE WEEKLY JOURNAL, indoor vertical farming allows farmers to generate fresh food items in a controlled environment with smaller required spaces.

“Everything is with artificial lights and it works with 62 degrees F of temperature. It is a completely different environment. We regulate the humidity and even the oxygen level is controlled. The concept of all these parameters is completely different from what one usually finds in the market,” Santana explained.

In its beginnings, Grupo Vesan started with a 40-foot wagon and is now producing a variety of fruits and vegetables in Canas Industrial Park in Ponce, working with a 20-foot ceiling and 14 different parameters that allow for a broader range of products. Even after Hurricane Maria devastated nearly 70 percent of the island’s hydroponics, the company stood strong.

As such, Santana hopes that more agribusinesses incorporate this system so that residents have access to fresh food in times of crisis. “One of the benefits of this system… is that it provides food security. What we project is that agriculture should move indoors,” he said.

“Agriculture in Puerto Rico is not where it should be. That is the main issue of food security tied to this subject of indoor vertical farming. On the other hand, at the technology level we are the pioneers in this process. We promote the idea of impacting the agriculture of Puerto Rico for new generations. [The idea that] new generations are not going to go to traditional agriculture; that is not true. We have, for example, an alliance with the Catholic University of Ponce and they send students here. They are working in air conditioning, in a white coat, like a pharmacist. They are doing scientific research, but they are really doing agriculture,” he added.

Another benefit of indoor vertical farming is that it can be employed virtually anywhere in Puerto Rico, regardless of the soil’s fertility or if the area is prone to flooding or droughts. In fact, Grupo Vesan was founded while the island was experiencing a drought that prompted the Aqueduct and Sewer Authority (Prasa) to ration water.

Indoor vertical farming is also tied to the concept of “urban farming,” which is gaining popularity in Europe. That is, residents in any corner of Puerto Rico, including the San Juan metropolitan area or beachy municipalities like Dorado, can start their own agribusiness.

Likewise, this type of farming can be applied in spaces labeled as “brownfields,” which are areas that are contaminated and, therefore, unsuitable for traditional farming practices. Grupo Vesan even sells wagons for these purposes because one of their aims is to popularize this technique.

According to Santana, if more agribusinesses emerge with this model, the island would drop its carbon dioxide (CO2) emissions because there wouldn’t be a need to transport fresh food via long distances. “It also provides fresher food to consumers and businesses like restaurants could apply the farm-to-table concept,” he said.

Moreover, Grupo Vesan packs its agricultural products with its roots in a pouch with water. This allows the product to have greater longevity, thus reducing food waste and allowing for financial savings by not having to purchase fresh fruits or vegetables as often. As an example, Santana stated that the lettuce produced by his company can last “two or even three weeks” without spoiling.

“Revenue, a sense of community and environmental impact; those are the components of a sustainable company. In our case, we don’t use any insecticide or pesticide, none of that. Our products are practically organic,” he affirmed.

He added that the company is currently developing a project to grow strawberries, noting that indoor vertical farming could eventually minimize the need to import foods that can’t be grown in Puerto Rico via traditional farming.

As originally reported by: The Weekly Journal