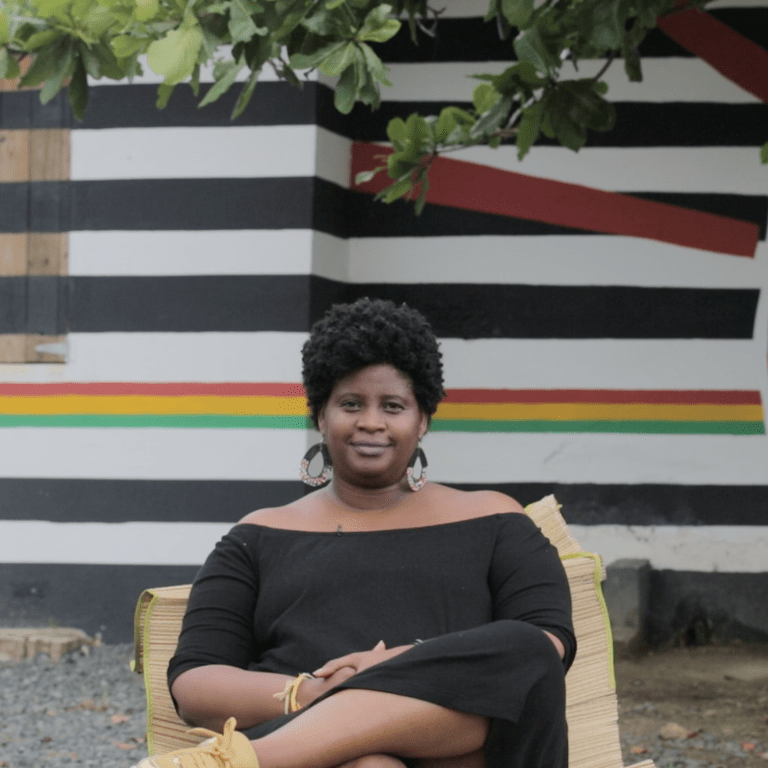 When Sacha Antonetty-Lebrón was a young child growing up in Puerto Rico, she attended modeling school, her dreams of appearing in advertisements sprouting like the palm trees in the sandy streets of her native island.

But even with her bright eyes and perfect smile, Antonetty-Lebrón was often warned there may be one factor that worked against her.

“The owner invited me to the modeling school but made sure to tell me, ‘They didn’t ask for Black girls, but I’m going to send you. Do the best you can do,’ Antonetty-Lebrón remembers.

And when she did get calls for castings, she rarely saw any other Black faces. Antonetty-Lebrón, whose skin was a deep rich brown, learned at an early age that Afro-Latinos—or afro descendientes—were noticeably absent in nearly every form of Spanish media in Puerto Rico.

Still, when Afro-Latino images did appear in media or television, they were often in offensive or derogatory roles—and just like in the United States, actors would even dress in blackface for comedy.

The erasure and devaluation of Afro-Latinos in the media was so harsh that Antonetty-Lebrón’s father—a Black Puerto Rican himself—would often search high and low for copies of magazines like Essence and Ebony to bring home from his trips to New York. When he arrived with the gifts, his daughter would flip through the pages with excitement, soaking in the images of women who looked like her. And on TV, she’d turn to MTV, eager to catch a glimpse of Janet Jackson confidently sporting braids. She was so enamored with Jackson’s look, in fact, that she even asked her mother to stop the painful and damaging process of hot combing her hair so that she, too, could wear natural styles.

Those early encounters with images of Black beauty are what inspired Antonetty-Lebrón to pursue a career in media and communications. “When I saw that this was possible, I said ‘I want to do a project like this. I want to have a space in the media where we have a representation, and our beauty is seen.’”

After graduating from college with a communications degree in Puerto Rico, Antonetty-Lebrón earned a journalism master’s from Florida International University in 2003. Eventually, she worked in public relations before becoming a senior leader in communications and marketing at the Boys & Girls Club of Puerto Rico.

But all the while, Antonetty-Lebrón was quietly working on a dream that would’ve made her younger self proud: In December 2018, she launched Revista étnica(Ethnic Magazine), a 60-plus page glossy print magazine dedicated to celebrating the beauty and social issues of the Afro-Latinx communities in Puerto Rico.

Each edition of Revista étnica features Afro-Latinx models, writers, photographers, and subjects from across the island, including profiles of Afro-Latinas doing extraordinary things—like a young woman who interned at NASA—plus investigative reports and features about everything from music duos to local restaurants and a shopping guide for afrocentric turbans and accessories. The magazine is written and published in Spanish, with copies available in local Walgreens, Walmarts, and coffee shops throughout Puerto Rico.

To fund her project, Antonetty-Lebrón won a two-year grant from the NoVo Foundation, a philanthropic group dedicated to advancing causes important to women and children. Revista étnica’s first issue featured a stunning spread of models wearing colorful African-inspired turbans and full natural hair—the same kind of hair Antonetty-Lebrón’s was required by her mother to straighten as a child, despite how painful and uncomfortable the process was, in order to look “presentable.”

Antonetty-Lebrón reflects on Revista étnica’s imagery while sitting for our interview in Loiza, a town founded in the 1600s by Nigerian slaves off the northeast coast of Puerto Rico. It’s an area known for its preservation of African traditions—and having one of the highest populations of Black Puerto Ricans on the island.

“I believe that our best resistance is through expressions of beauty,” says Antonetty-Lebrón. “It’s what gives us power. That’s why in each edition of the magazine, we present our natural beauty, our intellect—what makes us strong.”

“If what represents you is your afro hair, then wear it as big and as beautiful as possible! If it’s your turban, then wear the prettiest, most colorful one you have. If it’s fashion, use it. If it’s gold or jewelry, use it—that’s what made Africans royalty. We were kings and queens—so own it, and be proud.”

But as Antonetty-Lebrón remembers well from her childhood, pride in Blackness wasn’t always considered to be marketable in Puerto Rico. In fact, when she first shared the idea for the magazine 10 years ago with a mentor at an entrepreneurship program, her mentor told her the concept was doomed to fail because Puerto Rico is a “colorblind society.”

“She commented that people in Puerto Rico simply did not want to identify themselves as Black,” Antonetty-Lebrón recalls. “In other words, she believed people wouldn’t be interested in my project—that it wasn’t going to be important or necessary.”

In the United States, racial segregation enforced strict political and social barriers between Blacks and whites long after slavery. (“One drop” of African blood designated you as “Black,” no matter what your complexion or ethnicity.) But in Puerto Rico and other parts of Latin America where racial mixing was common, there are numerous ways to identify racially, with different names for different combinations of skin tones, hair textures, and facial features, such as “negra,” “trigueña,” or “morena.”

It’s one of the reasons that not every Latino who has brown skin or African ancestry calls themselves “Black” or “Afro-Latinx”—and some might even take offense to the suggestion that they should be called anything but Puerto Rican.

Further complicating the issue of identity on the island is the fact that there is indeed still racism in Puerto Rico, even if it operates institutionally or more subtlety through personal interactions. It’s a reality Antonetty-Lebrón thinks has led to some Afro-Latinos to shying away from identifying as Black—and encourages non-Blacks to remain in denial about the importance of race in society.

“That was one of the most painful moments of the process of launching a magazine,” says Antonetty-Lebrón. “A major newspaper in Puerto Rico did a story about Revista étnica, and it brought up a lot of comments like ‘Oh, they just want to create division, but we are all Puerto Ricans—don’t try to divide us’ and ‘Now they want to be more important now that it’s cool to be black.’”

While some have questioned the need for Antonetty-Lebrón’s magazine, others are demanding even more content.

“The acceptance has been very beautiful,” says Antonetty-Lebrón, adding that after sending magazines to countries like Colombia, Spain, and the Dominican Republic, she’s gotten positive feedback that even led to a partnership with the paltformAfroféminas in Spain.

Not long after the release of the latest issue of Revista étnica, Yvonne Denis, an Afro-Latina Puerto Rican professor, found a story inside that hit close to home. Denis’ grandson, who is Afro-Latino, was being teased at school for his natural hair. And in one of Revista étnica’s cover stories, journalist Edmy Ayala had penned an investigative piece documenting the racism Black Puerto Rican children face in public and private schools as a result of dress codes and rules that ban natural hair.

“Black children in Puerto Rico have been exposed generation after generation to comments against their physical appearance, and it’s been taken too lightly—as a joke. It was a good moment to find the magazine was analyzing a situation that was happening in my own family,” Denis says. “It helped me reinforce and comprehend the dynamics that exist in schools, and helped my daughter understand the situation with her son had a lot to do with institutional racism that is not recognized.” Due to an intervention from Denis after reading the magazine, her grandson’s school is now expected to hold a workshop about race issues.

Antonetty-Lebrón purposefully chose to focus on youth for the latest edition of the magazine; her own young sons—Khalil, 4, and Amara, 1, both Afro-Latino boys—are featured as models in the issue. And unlike their mother, they won’t have to wonder whether there is anyone else who looks like them being celebrated on their island.

With Revista étnica, Antonetty-Lebrón has made it clear that Black is not only beautiful—it’s also 100 percent Puerto Rican.

“I have received many messages from people who say thank you for the project, thank you for existing, because I have an opportunity to see myself reflected and be proud of who I am and what my family and community is,” says Antonetty-Lebrón.

“We are here. We count—and we are powerful.”

As originally reported by: The Oprah Magazine