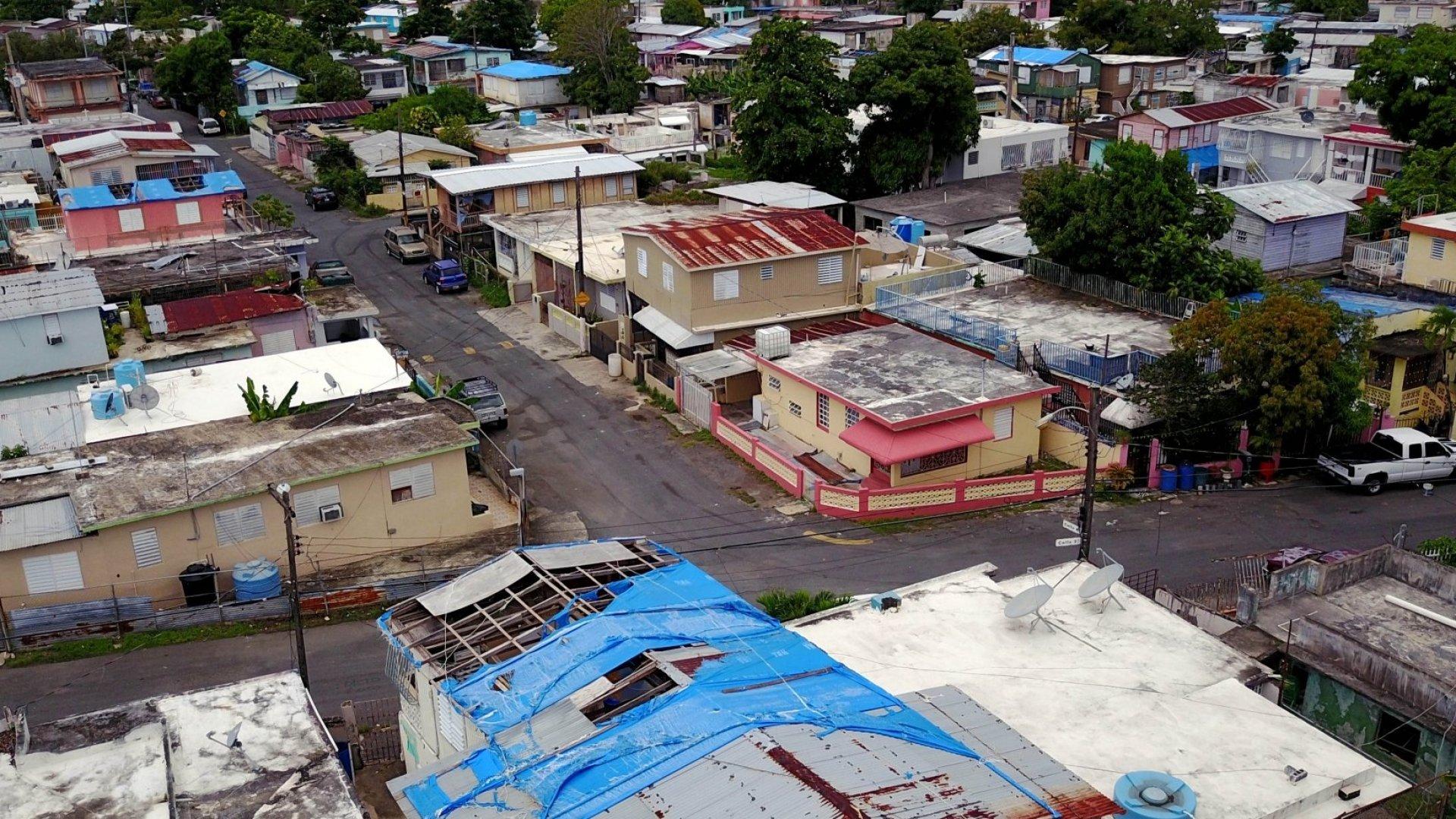 Two Years After Hurricane Maria Ravaged Puerto Rico, Startups Are Thriving Amid Plans to Fix Problems Uncovered by the Storm

For small-company owners in Puerto Rico, Hurricane Dorian’s transient threat in August meant an unwelcome chance to tire-kick their carefully crafted emergency plans. For Jonathan Gonzalez, it provided something better: proof of concept.

A few months after Hurricane Maria battered the island–exactly two years ago today–Gonzalez and three partners founded Raincoat, an insurance company that instantly processes claims. Cataclysmic weather near a policyholder’s home or business triggers the payment, which covers not just property damage but also anticipated lost income due to the storm. “With life insurance, someone dies and you get paid the agreed-upon amount. The same concept can be applied to weather,” Gonzalez says. “If you know something happened then you can give people their money immediately.”

Raincoat’s system got a more-or-less dry run during Dorian, which largely spared the island. About 50 beta testers signed on as policyholders. The system generated what–if it were live–would have been $250 payouts to compensate for time lost and money spent on supplies preparing for the disaster.

Gonzalez launched Raincoat in response to the hardships of thousands of Puerto Rican storm victims waiting to be made whole by their insurers. A year after Maria, more than 13,000 remained in limbo, according to the territory’s government. That included Gonzalez’s mother, a diabetic on dialysis who struggled to pay her bills. “When they finally got back to her, they paid zero,” Gonzalez says.

Hurricane Maria killed almost 3,000 people, devastated Puerto Rico’s infrastructure, and took a $43 billion swipe at an economy already choking on debt. Seventy-seven percent of small businesses got hit financially, according to the Federal Reserve Bank of New York, with the number permanently closed variously reported between 5,000 and 8,000. Recent events–such as the July resignation of Governor Ricardo Rossello following release of offensive texts that, among other things, disparaged hurricane victims–have added political insult to personal and economic injury.

In conversation, company owners and entrepreneurs are careful not to downplay the horrors of Maria. But many say that their own companies are thriving, in part because of moves they made in response to the storm. Meanwhile, a spotlight on the island’s tax-light business climate is attracting more small companies to move there. And while financing remains a problem, the nascent entrepreneurial ecosystem–begun before the hurricane–is ramping up nicely. “The growth this community has had in the last three years has been insane,” says Gonzalez, a serial entrepreneur. “I would bet that within the next five years, Puerto Rico will have its first unicorn.”

Hundreds of startups are sprouting across Puerto Rico, where entrepreneurial activity was once scant. Grupo Guayacan, a support organization for startups and scale-ups, has been operating on the island for more than two decades. In 2019, it received a record number of applications–at least double–for all its programs. “Hard times and crises force you to think about what you’re going to do,” says executive director Laura Cantero. “In Puerto Rico, people are saying, ‘I’m going to go out there and build my own business.'”

One of the island’s few accelerators is the government-backed Parallel18, which launched three years ago to attract scaling companies from North, Central, and South America. The idea was to seed global-minded founders among the territory’s entrepreneurs and to encourage transactions of the imported teams with Puerto Rican companies. Two weeks post-storm, executive director Sebastian Vidal conceived a program for early-stage local founders as well, who might have otherwise left the island.

In the storm’s messy aftermath “there was no Wi-Fi or telecommunications,” Vidal says. “So we went around knocking on doors at universities and co-working spaces.” The Parallel18 team persuaded 300 local startups to apply and selected 40 for its first cohort. Another 34 companies followed. Vidal estimates that 30 percent of Parallel18’s local startups address problems in areas such as energy, sustainable food production, and temporary housing that arose during or after the hurricane.

Some startups that predate the hurricane pivoted in response to it. A few months before Maria, Emmanuel Oquendo and Israel Figuerora Fontanez launched BrainHi to build custom chatboxes for retailers, restaurants, and others. But when they discovered how overwhelmed doctors had become as a result of the exodus from the island of colleagues and staffers, they switched the company’s focus to health care. Last year, BrainHi became the first Puerto Rican business ever accepted to Y Combinator.

The money side, meanwhile, has seen some small stirrings. In February, Morro Ventures–recently hatched by Advent-Morro Equity Partners in San Juan–introduced a $20 million venture fund targeting early-stage companies. And the Aurora Angel Network, Puerto Rico’s first angel group, has invested in two startups since its January launch: Zomio, which makes a sensor that prevents children being accidentally left in cars, and Guilty, a fashion rental business. Vidal says that local angels and small funds have pumped a collective $13 million into Parallel18’s companies over three years.

For most startups, though, funding remains a problem. Raising capital on the mainland is an option, “but it’s a steep climb,” Cantero says. “Investors always ask who at home backed you. Someone has to provide that first check.”

The rewards of being there during crisis

With its assault on the power grid, Hurricane Maria temporarily shuttered most businesses in Puerto Rico. But many that quickly bounced back got down to helping other companies recover. In the process, they won clients and generated storm-inspired ideas for new products and services.

Tom and Iris Vincent own Prime Air Corp., a 32-employee freight and logistics company that, during the hurricane, worked with the Centers for Disease Control to store and distribute medications and portable hospitals from one of its warehouses. That experience “demonstrated to us the need for a temperature-controlled medical devices and pharmaceuticals facility at the airport,” says Tom Vincent. The company’s new 12,000-square-foot space opens this month on an island where big pharma casts a long shadow.

Prime Air benefited, too, from being among the few businesses operating at the airport in the days immediately after the storm. The Vincents picked up about 20 new clients who needed help wrangling flights to bring in supplies and later made Prime Air a permanent vendor.

Ricardo Alvarez-Diaz also prospered by being useful. During Maria the co-founder and CEO of architecture and interior design firm AD&V served as liaison between FEMA and the private sector. He says his ability to advise clients based on inside knowledge about the prospects for federal aid and other pressing business concerns strengthened relationships going forward.

And elements of the government’s reconstruction plan fall right in AD&V’s wheelhouse. The plan favors mixed income and affordable housing–a specialty of the firm, which is currently working on a development comprising 445 units. The business is also fielding requests from parts of the mainland, like Texas and Florida, that want to reduce their own severe weather vulnerability. AD&V’s resilience credentials got a boost when one of its projects–only 80 percent complete at the time and consequently more vulnerable–emerged from Maria with barely a scratch. “It became something of a story in the media,” Alvarez-Diaz says. “People said they are not cheap. But there is a reason.”

The siren call of low taxes

With greater emphasis on entrepreneurship, Puerto Rico is spawning more businesses. It is also importing more. Since Maria churned across the island, the number of companies relocating there under Act 20–which taxes service-exporting businesses at 4 percent, compared with 21 percent on the mainland–has roughly doubled, to more than 2,000, according to Robb Rill, the founder of The 20/22 Act Society, a membership organization for such businesses, as well as private equity firm The Strategic Group PR.

The kinds of companies that are coming have expanded, too. At Act 20’s inception in 2012, most were private-equity firms and hedge funds. A wave of cryptocurrency traders in 2017 and 2018 attracted some negative publicity but also raised visibility for the program. That higher profile, coupled with recent changes–specifically the elimination of a requirement that companies employ at least five people on the island–tempted more startups and businesses in industries such as tech, marketing, and consulting.

Before that change “unless you had revenues of $2 million or more at bare minimum, we wouldn’t recommend you move,” Rill says. “Now, with the employment requirement at zero, you are seeing startups that have no revenue moving in anticipation of significant growth.”

Simon Vielma is one entrepreneur who found those tax incentives too good to pass up. Last year, he moved himself and his then-3-year-old company Bidwise, which helps connect e-commerce businesses with consumers, from Miami to San Juan, where he operates from a loft while seeking top-quality office space to buy. He is in the process of hiring two employees in Puerto Rico and will soon recruit five more.

The prospect of hurricanes doesn’t faze Vielma. His clients reside on the mainland and in Europe, his data is in the cloud, and his employees can work remotely. “I think this is a big opportunity, and I would love to see more companies moving here,” he says. “We need more people raising awareness. Don’t forget about Puerto Rico.”

As originally reported by: INC